The area of performance is a meeting point, or better said a crash point, between two urban antithetical urban weaves; on one hand, the Old Town with its traditional farmhouses, on the other hand, the interventions of speculative nature from the seventies, solved with an incomprehensible lack of sensibility towards the pre-existent.

Within this environment, the void caused by this situation, an edge between both urban typologies is made up as a space of a very complicated resolution, due to the brutal difference of scales and architectural languages. Necessarily, the intervention must palliate the visual impact and the overwhelming feeling of volumetric control of the most recent building on the old one. That is the reason for the placing of buildings, serving as a barrier between the two of them, pointing out the visual connections and proposing a method that is closer to the traditional language regarding the dimensions in height, spaces and voids, without relinquishing the expressivity of certain new materials or the commitment with contemporary architecture.

This way, the existent residual space in the interior of the block is recovered for the public use constituting a square, and very clearly linked to the lower area of the block, this is, the Old Town, where somehow it is more urgent to palliate the deficits in infrastructures and services. The square basement is occupied by a car park in a helical development that, taking advantage of the square slope, permits its resolution without connection ramps among the different levels, slightly sloping. The two resulting flights are ventilated and lit up thanks to a central fissure, as well as by electrical and mechanical systems planned in compliance with applicable regulations. This fissure becomes visible in the upper part of the square, finished on facade with a latticework and in continuity with the equipment foreseen in the area mentioned above.

The encounter with the back parts of the existing houses in Julio Prieto Nespereira Street is solved with a landscaped area and an average closing element which, while serves as a containment low wall, it is adapted to the dimensions of each plot of land, allowing the fitting of a gate to permit the direct access to the square. In that area we can find a small building in the shape of a newsstand which contains the outside access to the garage from the square, the forecast of a lift for the same use and the necessary voids for the garage forced ventilation.

In a similar way, the meeting of the new building with the back narrow street with Peña Trevinca (which is outstandingly extended up to be provided with a minimum width of 7 metres), includes a pedestrian landscaped walk whose intention is that of mitigate the proximity of the new residential buildings with the back block and the views which may arise from that fact.

The apartment buildings are developed in a very rigorous modular scheme: all the rooms have the same conditions and dimensions, apart from the number of bedrooms which may contain; the main estancias (living room, dining room and bedrooms) open their lights towards the square, whereas the service ones (kitchen, toilets, washing line space) do this over viewing the back area. The surface of the main rooms adapts to the habitability exigencies by the procedure of adding a new overhanging body acting as a balcony or a gallery, according to the situation and which faces back the inside in the case of the smallest homes. The great adaptability allowed by the plan, with rigid cores vertical links and installations voids as the only determinants, facilitates a free location of the different kinds of house, which permits the placing of the overhanging elements in an irregular position on facade, breaking the monotony less flexible solutions oblige to and, again, with reference to the irregularity within the order, one of the predominant features in the Old Town.

The materials that form the supporting structure and the exterior wall of the buildings (basically concrete and steel) are showed as finishing materials and provide the intervention with pace and coherence. The aim here is the volumetric and formal conciseness to be clear also in the use of materials, giving shape to the nature and identifying mark of the work.

Below the square slope, and following the levels previously described, there is a garage with capacity up to 295 vehicles and 88 junk rooms which occupy three basement floors as well as part of the lower-ground floor. On the lower-ground floor there are also premises destined to private equipment and the common areas belonging to the D building, destined to housing-residential to rent for people older tan 60.

A total number of 56 houses are planned (22 with one bedroom, 26 with two bedrooms and 8 with three bedrooms), as well as 7 business premises, a space for private-issue equipment and different spaces for common use and installations.

The square offers a pavement that combines stone with prefabricated concrete. It is foreseen the inclusion of a relevant artistic intervention and, the urban furnishing will have metallic arcades including light fittings for purposes of stage lighting, benches, as well as floor light fittings and wall light fittings. 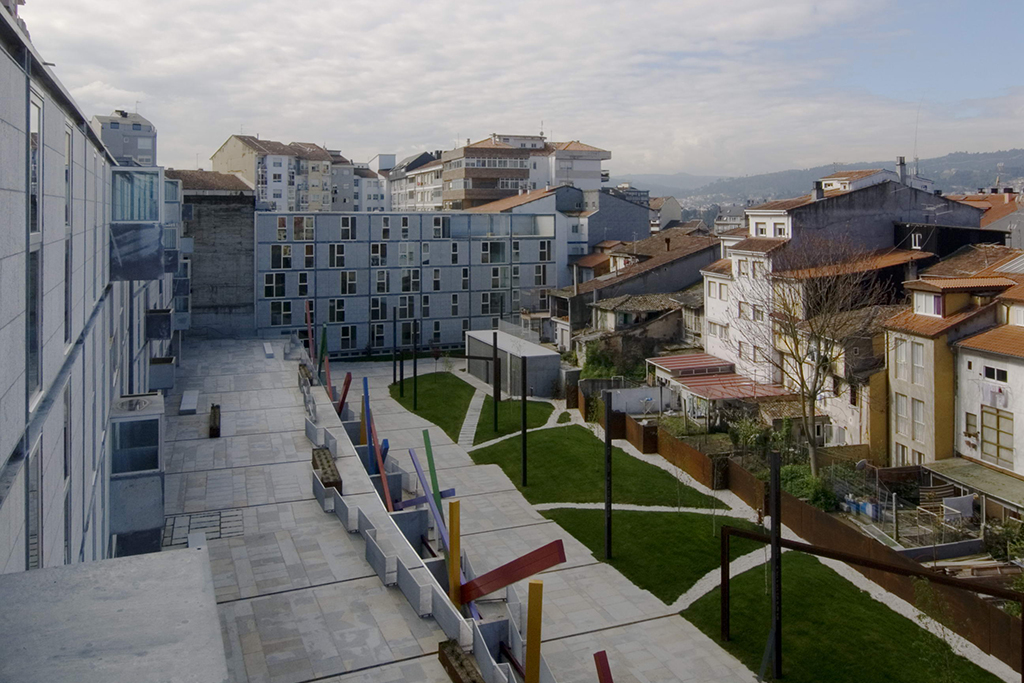 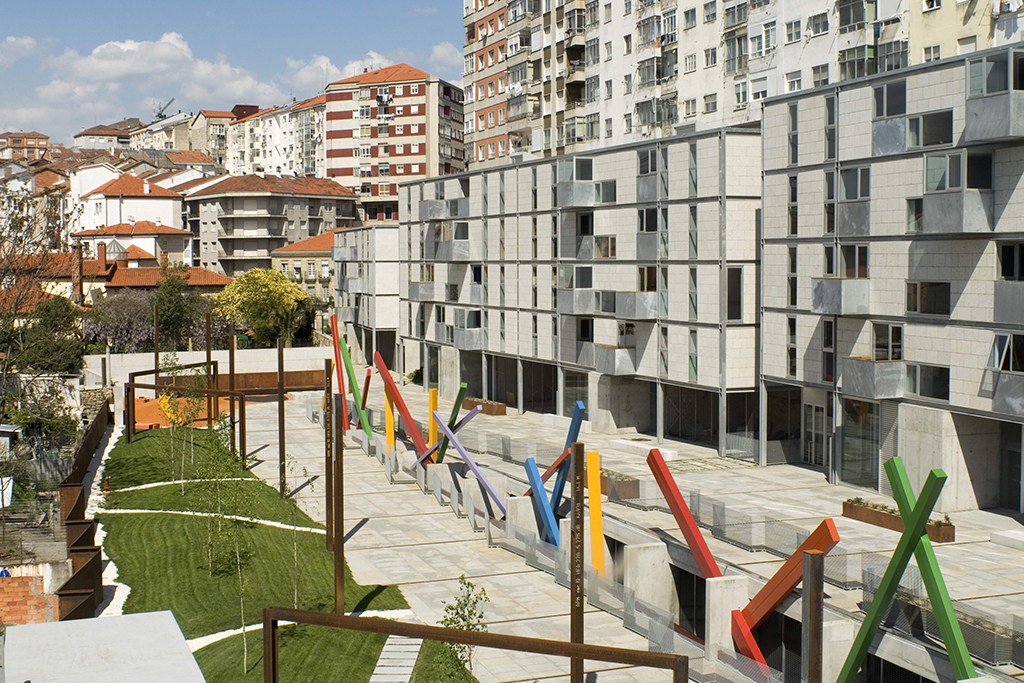