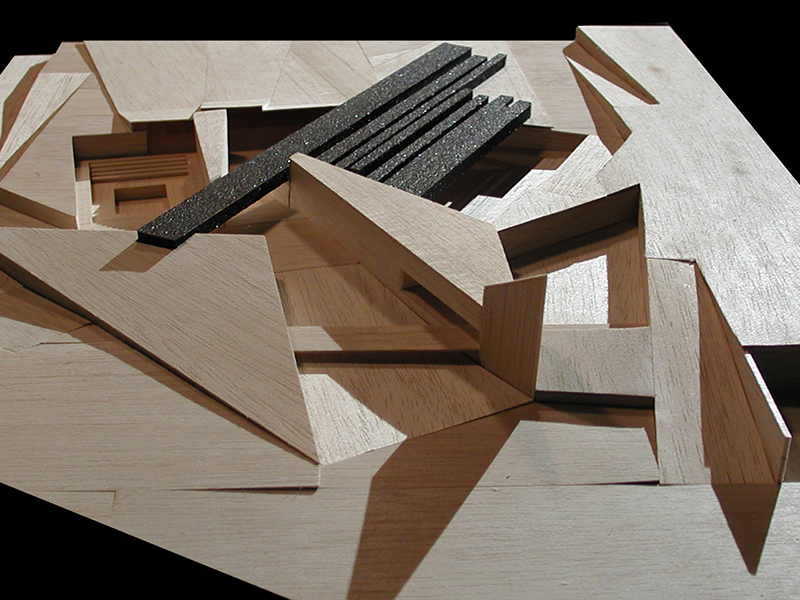 The building as landscape

In view of the absence of landscape, the proposal is born from the will of generating it. We assume the prominence as for the image and scale of La Peineta Stadium, the only referent in an environment still to be colonized.

This way, we can imagine the site with its image of yesteryear, when it still was a sepiolite quarry, before they began to mounting up earth coming who knows from, but which almost certainly has banalizaded a landscape which should have in its day the charm this exploitations often evoke us when, mainly in the final stage of neglect, it starts to appear vegetation, useless machinery starts to rust and one cannot help but wonder what kind of logic, clearly not architectural, has made up spaces half way between the natural and the artificial. What capacity of violence and destruction has been accumulating in some places and how occasionally the land has been able to assimilate it.

We have in mind many quarries, like the one in Las Médulas, in El Bierzo (León-Spain) where, the Romans, in order to extract gold distorted a landscape that today, paradoxically, has been declared as heritage of humanity while the natural elements and the human intervention appear closely interweaved. From this imagining, absolutely not documented, only invented, comes the conception of our proposal as a restoration of that quarry, we bore through it to come back to the original terrain, the solid ground that lies 30 metres under lands unable to cope with the construction. A destructive action which precedes the constructive one but which in this case is made on artificial surroundings, strongly manipulated.

We can imagine the logic for the excavation, which ways do shovels and trucks need for the transportation of land? What appearance can the work phase have, ruled by the machines accessibility logic, the movement and stack of land in the state previous to the foundation laying? What may happen if the digging was the same as the finish?

We are interested in those architectures which trust more the formworker than the painter, the welder than the plaster worker, the canoeist than the tips and finishes worker. The canoeist is a user, maybe the first one and one of the most privileged, who interprets in a particular way the concept of space and who has an enviable capacity of action.

So planned, the building does not exist as such, it is nothing but a landscape, in the way in which it seeks to approach closer to the natural than to the constructed, to the topographic instead of to the architectural; it lacks facades, the geometry lines free themselves from the orthogonal logic. It seems consubstantial to the own concept of swimming pool, quiet and poor imitation of the lake, the river, the sea.

The hill and the quarry

The interior landscape is the quarry; the outside is the hill, the woods. While the inner part is being bored through, the exterior part is covered with a mixed structure, made up of folds and big box shape beams, searching for an image of lightness and in contrast with the energy of the sculpted aspect of the quarry. This outer part wants to be passable, accessible, a spontaneous generator of uses still to be defined. Its profile is that of a supposed line of the horizon, growing towards the encounter with the stadium, and becoming a kind of topography, softer in the contact with the land.

It is only natural, or unless this is how we have planned it, the option of transmitting the loads directly to the solid ground, bringing both environments closer instead of resort to expensive and hard-to-control piers foundation systems and special foundation layings. A banks stabilization is proposed, achieved by systems de reinforced soil and retaining walls, to which different textures will be incorporated, according to the use of the stone lost formworks and the prefabricated concrete shutterings. The banks adopt the slope of the stands; the walls are easy to anchor thanks to the excavation geometry, in the big canvases we proceed to the use of anchorage and buttresses. Part of the stands, those with a permanent nature, appears on these banks; the use of prefabricated elements will emphasize the image of the cutting on the rock.

From the contour of the current ground gradient, all the elements; grandstand and roofs, acquire a lighter nature, by way of provisional structure or scaffolding, like something suspended with the same intention as a tent in the desert is placed. The roof structures, both the box shape beams and the folded roof are going to be made up by galvanized steel elements, protected by wooden boards and in ventilated chambers to prevent corrosion. The rest of the structure, up to the spot height + 665, will be made out of reinforced concrete.

The specificity of the itineraries on the ground plant determines and suggests the plan on the ground plant. The different basins are constituted around a central space in the shape of a panoptic scheme, which allows an easy interpretation of the internal space, keeping the dimensional and fragmentation conditions we consider as suitable. The concentrated layout of the accesses in the access area establishes a specialization and segregation as for the itineraries according to the condition of both the user and the visitor (athletes, press, spectators, technicians, important figures) and to the building to which they address. Optimum accessibility conditions are permitted as well as the possibility of an effective flow and circulation control, whichever the circumstances of use of the complex may be, being also possible to sectorise and to make independent each and every basin.

The complexity of installations for the conditions of use of the swimming pools compels to an important foresight of spaces to contain them, to foresee the ways for tubes and pipes and to look for systems in order to optimize the economic cost of the higrotermic fitting-out of the sites.

Independent swimming pool basins are planned, leaning on low walls and totally accessible onto all their exterior surface from a basement that will also contain an important part of the planned buildings, such as a transformation centre, compensation basins, water filtration and water treatment equipments, sanitary hot water accumulators, control and leading mechanism, etc. The boiler rooms and the cold compressors will be located in some spaces planned to be situated on the roofs, according to their accessibility, set of regulations and simplicity of ventilation and fresh air exchange.

We defend the economy of the solution proposed according to a wide variety of reasons. Those previously pointed out, regarding structural and foundation systems; the digging in dispersed grounds is outstandingly less expensive than a deep foundation with the ground conditions obtained from the geotechnical study.

The building conditions on the subsoil imply that a great part of the curtain walls are not in contact with the outside, which, apart from the obvious advantage it involves in terms of thermal transmission and the energy saving it entails, it tremendously simplifies its implementation, because it is not necessary to have several layers with interposed insulations and expensive finishes on both faces.

And after the Olympic Games...

The dimension and features of the aquatic sport complex seek versatility in the use of the sport facilities regarding the different conditions of use.

That way, certain parts of the facilities are planned as temporary parts or they may be subjects of alteration or partial adaptations; the grandstand that is foreseen for a capacity of 18,000 people can be dismantled to reach a number of 2,800 seats for the diving basin, 2,500 for water polo games and about 4,500 for the swimming pool.

As for the itineraries, some slight modifications in ramps, accesses and control areas will facilitate the transition from the exceptional and much diversified situation of massive influx which takes place during the games to a foreseeable regime of use for customers and federated members and possibly competitions.