A few times the devising process of a house starts from youth experiences, from the marks of the place, from childhood as such. On some occasions the architect can take part somehow in the choice of the place or the plot of land, but it is not frequent, however, to be fortunate enough to have the lanscape –as in this case- deeply anchored in the bottom of one’s childhood. We are talking about the entrance to the Ría, the Miño Beach, in La Coruña. This landscape -seen from the southwest side of the hill- is going to be the determining factor in the location of the house.

The reflections about the idea of the "lifetime house" (for maturity, for the children, for the old age and, also, a house for the family) have necessarily determined the creation of a flexible space, easily adaptable. But that concept of house demands, at the same time, the attention to all the requirements of social and cultural kind and those aspects expected from a contemporary house: comfort, safety, identity.

The house, therefore, must be flexible, its spaces must adapt without traumas to the needs of use, to the possible drastic or unforeseen changes; it must respond to a relation with the immediate outside and, also, with the most far-off. And it must widely encourage -indeed- the relationship among its own spaces.

At first, this house has been conceived as a dialogue among two volumes together with the ground, in which the materials, the voids, the transparencies, the inner and outer spaces and the indefinite or intermediate ones participate in an active way. As well as the garden, the water, the light...

Finally the result is a simple composition, with a volume (the highest one) sculpting the ground as a concrete wall and, gliding along the front part, the appearance of a light box which opens to the sea, full of transparencies and reflections, floating over metallic pillars. The chosen materials are to become better and better as years pass by, thanks to the expressiveness achieved by their own aging, without the fragile and evasive finishes which may be undoubtedly inopportune, under the damp climate of the Galician seaboard. The highest volume, “the wall”, made out of reinforced concrete –it could not be other way- stands out in the inside, petrified, the same goes for the slate that covers floors and toilets. It is covered on the outside with a cladding ventilated facade made of cedarwood boards from Canada. From the same especies and origin are the cedar trees in the garden. On the inside, a familiy environment has been established, unitary, with an empty diagonal which links evry floor and establishes a visual and acoustic relation among the spaces. In this volume the same diagram is repeated on every floor: unitary space and services core. In the "open box", and thanks to the swaying movement of the glazed plane, which goes winding between the two volumes, the spaces reach an order –protected and open-air, interior and exterior, seeking the maximum richness, taking advantage of the location and its singular landscape, which matches up with that of the childhood.

At last, a house, in which those childhood and adolescence experiences ring, where the memories of the well-known, the light, the sand, the sea, the landscape and the games melt, indissolublly, with architecture. 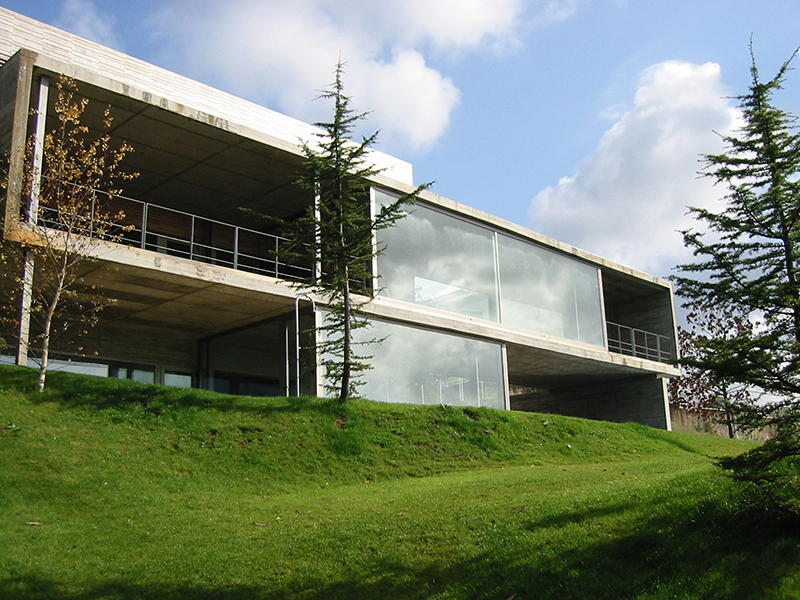 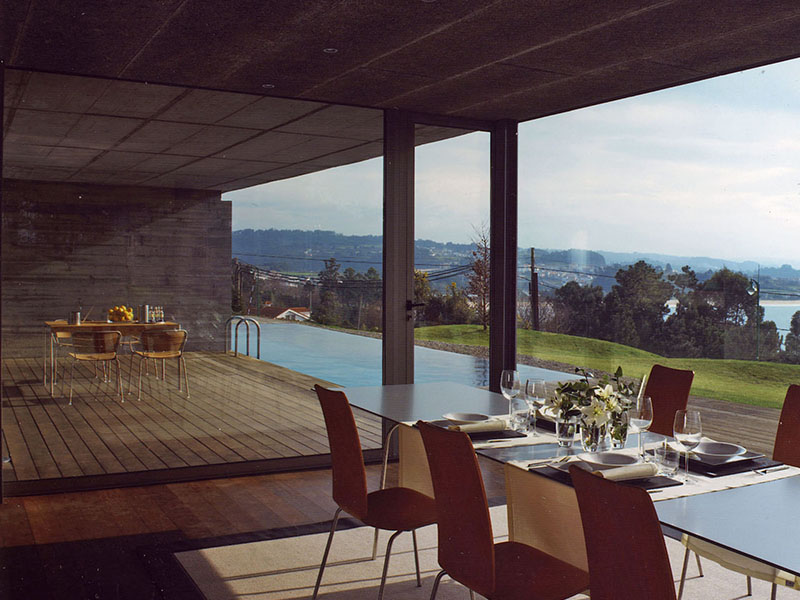